I am interested to understand what cognition means in biological terms and how abstract cognitive variables are implemented by cortical networks such as the prefrontal cortex. Brain circuits are continuously performing neuronal computations allowing organisms to act upon hidden rules of the external world. The ability to generalize an outcome from a couple of observations, to extract the rule from a situation or to maintain in focus a specific external input are examples of abstract cognitive operations peformed by many species. By studying the neuronal activity of model organisms during well controlled behavioral paradigms, we hope to reveal the neuronal correlates underlying the abstract cognitive varibles. To achieve this goal we need to have a good knowledge of "the basics" i.e. how neuronal networks are anatomically arranged and how do they respond to simple sensory and motor information. The above paragraphs develop how I think we should tackle the thorny problem of cognition in modern neuroscience with our current tools.

Before going further, I would like to also state here that research is a collective effort and I need to acknowledge here all the people I have/had the priviledge to work with. I received and I am still receiving all my academic training alongside great scientists. I was fortunate to be trained to handle the electrophysiological tools in the lab of Pr. Paul Salin working side by side with Dr. Sylvain Crochet. I got the unique opportunity to collaborate with Pr. Carl Petersen in Lausanne with whom we designed a long-term project together with Sylvain Crochet including a goal-directed behavioral task and optogenetic photoinhibition experiments in the head-restricted mouse preparation. We found out together a crucial role of the prefrontal cortex and the hippocampus in a simple sensory detection task. I am now pursuing how the neuronal mechanisms beyond the computational abstract properties are implemented by the prefrontal cortex in the lab of Dr. Marie Carlén within an amazing scientific environment and great community. All the people I have met along these years (students, PhDs, postodcs, technicians, professors,...) are contributors in one way or another to the ideas I am presenting here.

The PFC still lacks a conclusive definition, and the structure and function of this brain area across species remain unresolved. The PFC is implicated in perceptual, emotional, social, motivational, and numerous other brain processes and considered to enable flexible behavior. In following, disturbed PFC functioning has been connected to most, if not all, mental disorders, including drug addiction. Present-day preclinical researchers increasingly utilize mice (Mus musculus) as model animals. However, in parallel clinical transfer of pre-clinically identified therapeutics targeting mental disorder (and other brain disorders) is still at large failing. Lack of understanding of the structure and function of the brain hampers the understanding of which findings are transferable between species. Needless to say, deciphering of the structure and function of the PFC is of great importance to medicine. While class-common functions and class-common behaviors have been firmly established, effort must also be put into clarifying dissociations, and perhaps most so between primates and rodents. Ultimately, understanding of what makes the human PFC unique will build on comparative studies in different species. 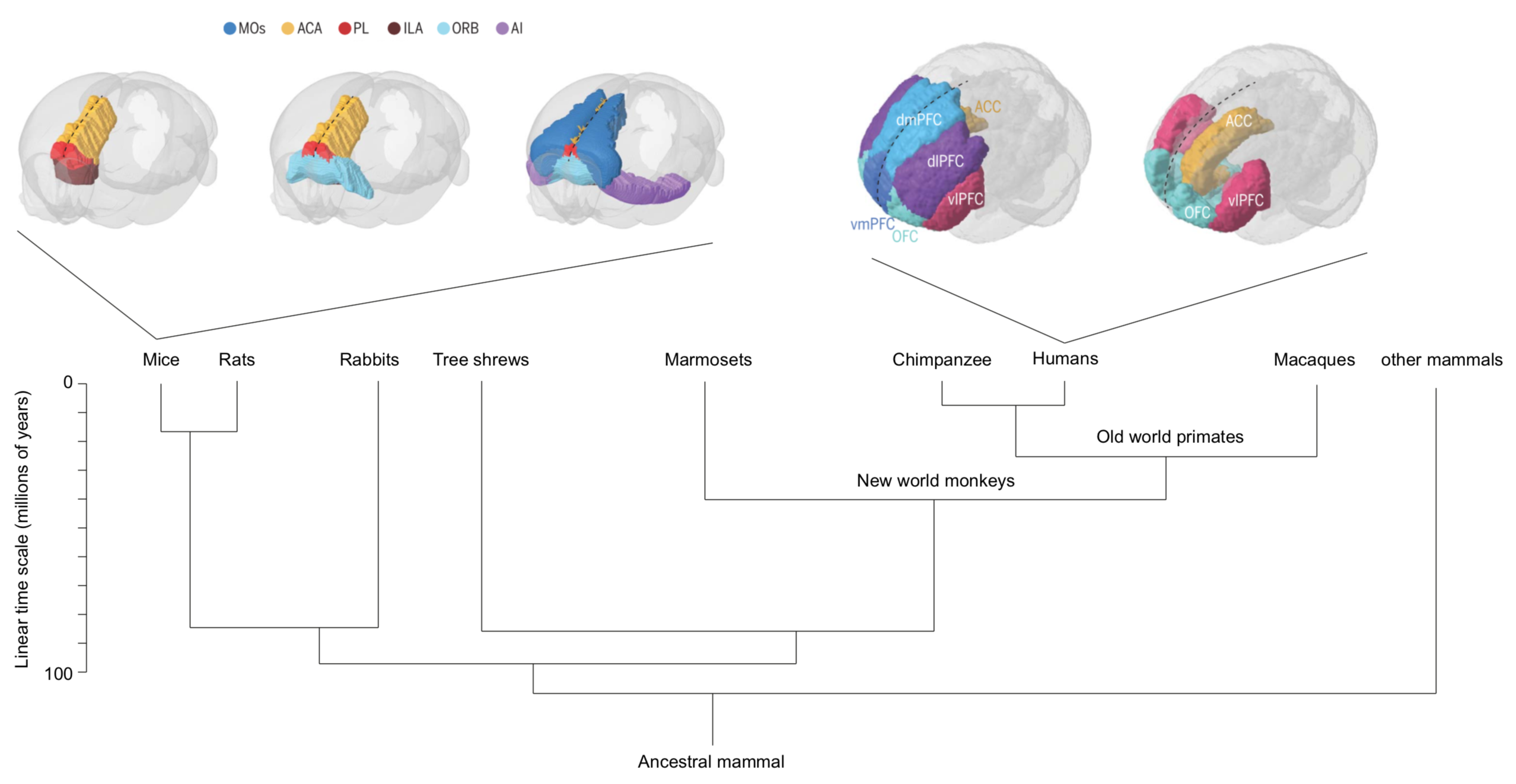 The PFC stands as a coherent cortical module more connected to itself than the rest of the cortex. To establish how the prefrontal module communicate with the rest of the brain, the main neuronal pathways need to be identified. Viral delivery of fluorescent proteins into genetically targetted neuronal populations has become, over the last two decades, the standard technique to trace afferent and efferent connections of a brain region. The high diversity of mouse lines and the access to a large viral toolbox are the essential components for the prefrontal circuit dissection. 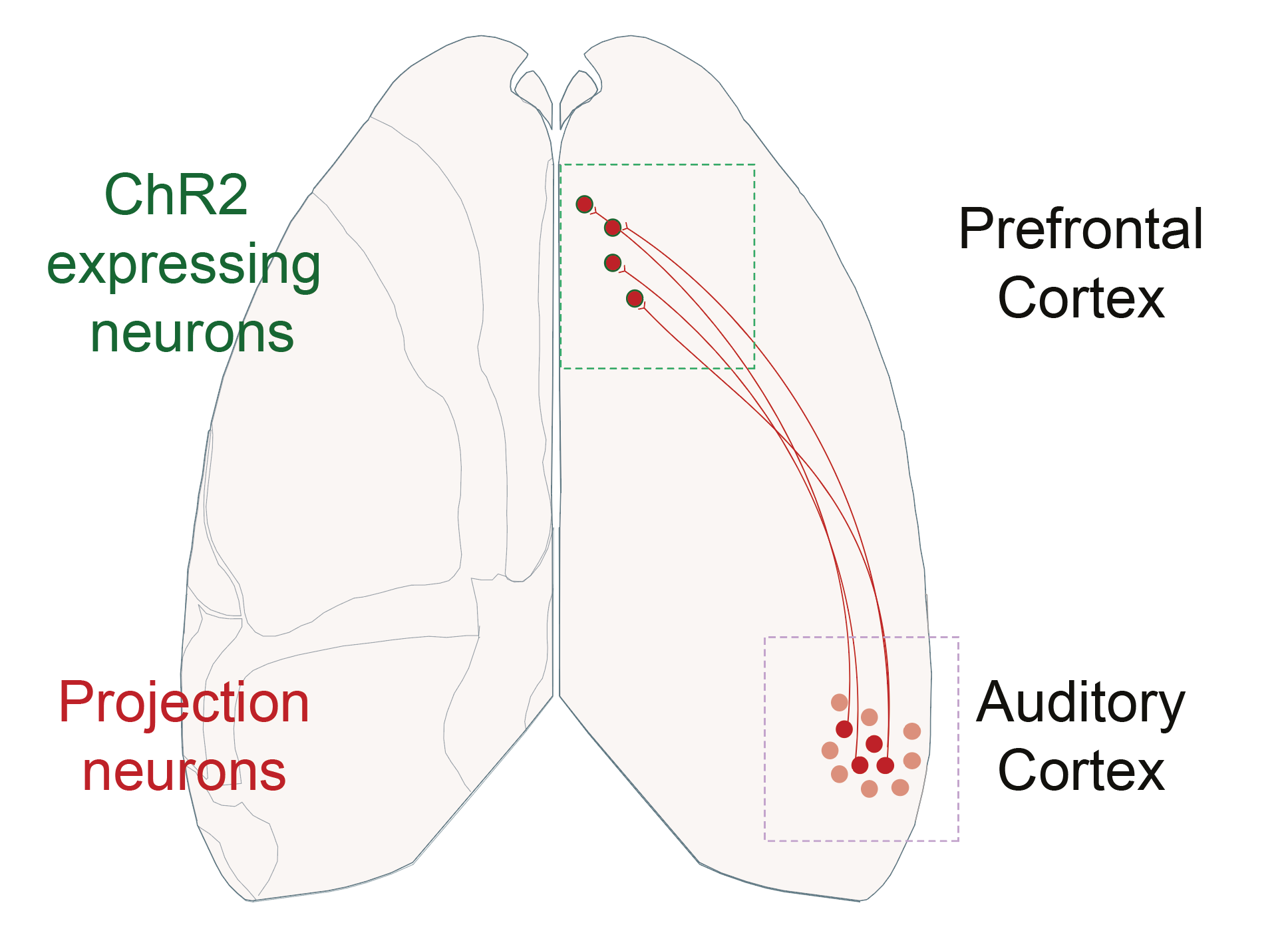 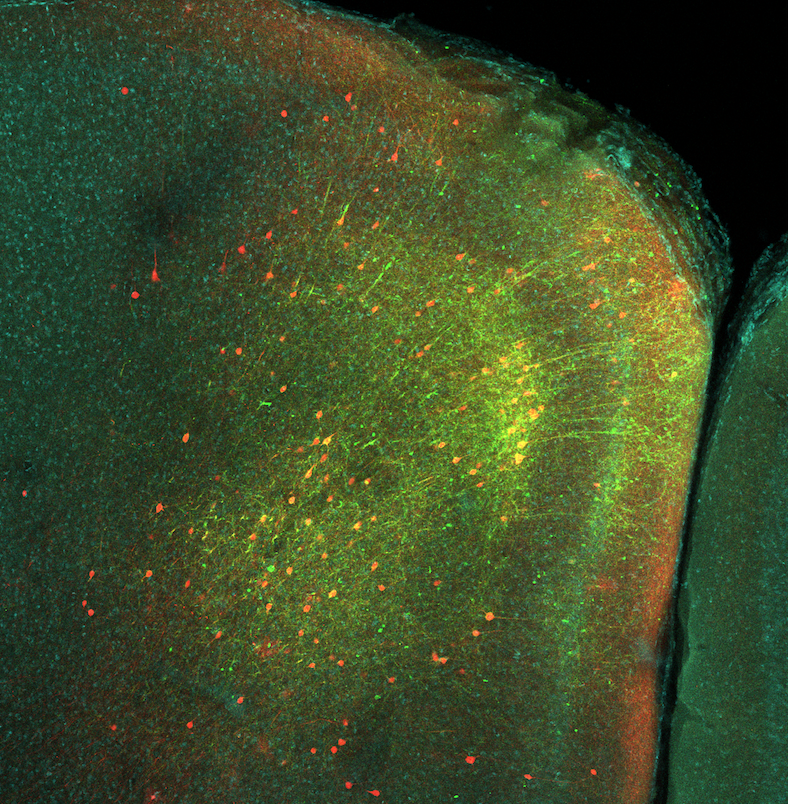 To record simultaneously the activity of hundreds of neurons from different prefrontal regions, I have been using the recently developped Neuropixels probes. These fully-integrated silicon CMOS digital neural probes (IMEC) allow to sample the extracellular neuronal activity simulataneously on 384 channels at a millisecond resolution. Combined with offline automated spike sorting algorithms, they offer for the first time the opportunity of recording units form many prefrontal regions in vivo. We use this system to gain knowlegde about the functional properties on the mouse prefrontal cortex regions while the mice engage in various behavioral tasks. 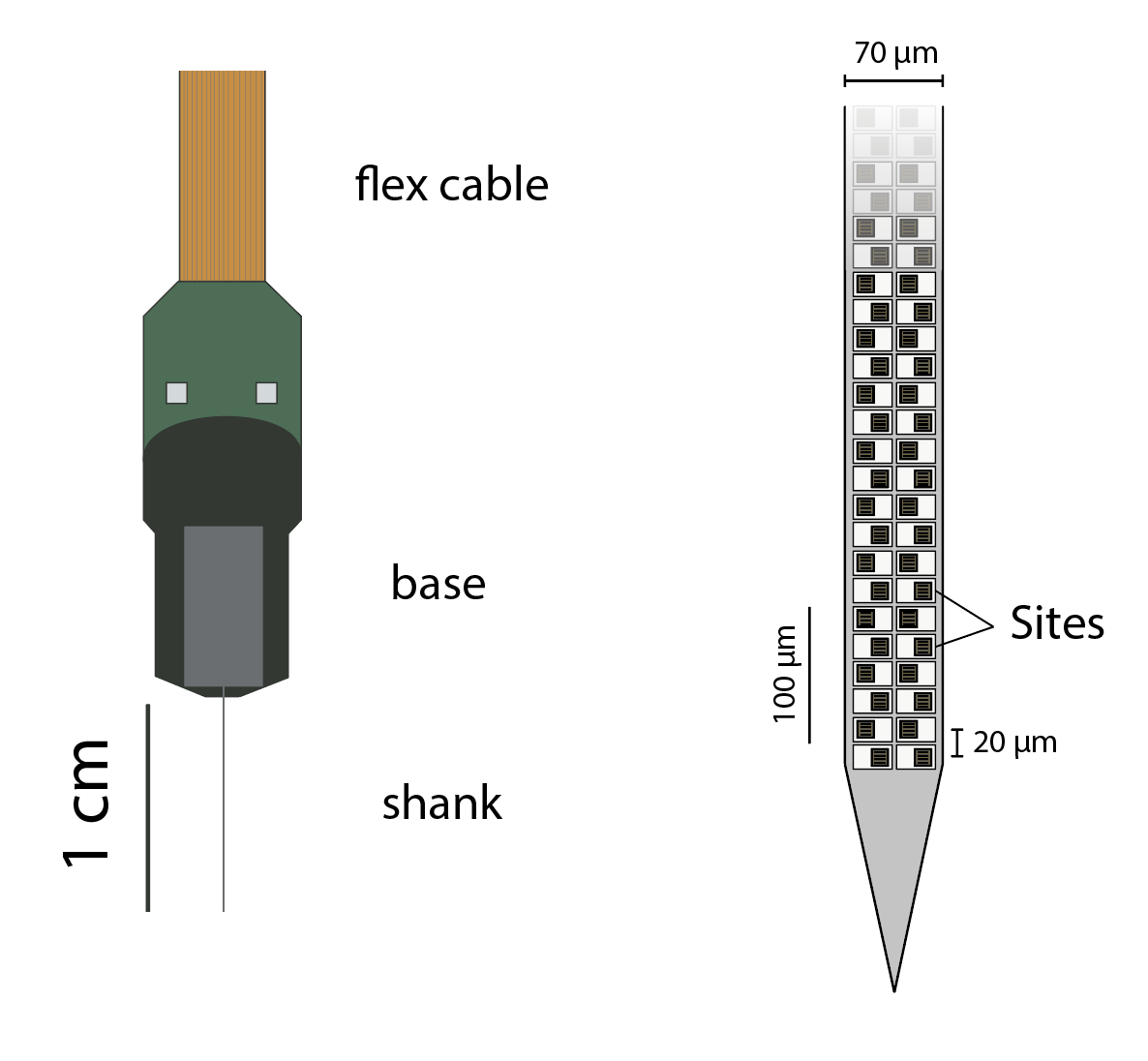 The prefrontal cortex has been ascribed many functions. We have summarized the last decade of mouse PFC research in a recent research synthesis. The data and methodology used to perform the functional research synthesis presented in the figure 3 of our perspective article: The mouse prefrontal cortex: Unity in diversity. The code used to generate the figures can be found on this github repository

The database used to perform our research synthesis is available as a table. This table has the following columns: the year of the study, the short publication reference, the PFC region name used in the original publication, the inactivation method used, the stereotaxic triplet provided in the original article. The averaged coordinates used for the 3D plot into the Allen reference Atlas (ARA) CCFv3, the correction applied to the DV value to translate it into the ARA (see also below), the 3 scores; complexity index, sensory modality and task type, obtained for every publication, 7 logical values (in MOs, in ACA, in PL, in ILA, in ORBm, in ORBvl and in ORBl) indicating in which PFC region the study is found when plotted into the ARA CCFv3 with our method and the name of the Allen PFC region containing the stereotaxic triplet provided in the original publication.

The full database table can be downloaded here as an Excel or csv file.

Here is an attempt of 3D visualisation of the database using plotly. Some improvements are still required. The Task type and Sensory Modality parameters are displayed as continuous variables although they are discrete variables. You can mouse over the dots in the scatter plot to see from which study is the data ONLY if you have already scrolled within the brain mesh (plotly feature). We hope to improve this 3D visualisation with time.

The CCFv3 version of the Allen Atlas is a 10um voxel resolution space and our analysis using this Atlas has some limitations. We generated 3D meshes for the brain outline, for each PFC region (MOs, ACA, PL, ILA, ORBm, ORBvl and ORBl) and for the PFC sudivisions described in the section of our Perspective “Parcellations of the PFC” (dmPFC, vmPFC and vlPFC) by using the MATLAB “isosurface.m” function (see folder Brain_meshes). To detect in which Allen PFC region each publication was peformed we used the “inpolyhedron.m” function (Copyright © 2015, Sven Holcombe). The thickness of the borders in the actual version of the CCFv3 is around 30um (3 voxels). As a result some triplet of coordinates are allocated to 2 regions while performing our “inpolyhedron.m” detection procedure. We inspected manually each triplet of coordinates whithin its respective ARA plate (see folder AllenAtlasLocationCCFv3_individualstudies) and visually assesed for these ambiguous cases to which Allen PFC region they belong to. Our level of incertitude regarding PFC region assignment needs to be put into perspective because, as accurate as we can be as experimenters, the provided stereotaxic coordinates in every publication are only averaged values reflecting the mean location of the targetted brain structures. This experimental incertitude is by itself an important limitation of our analysis and needs to be taken into consideration.